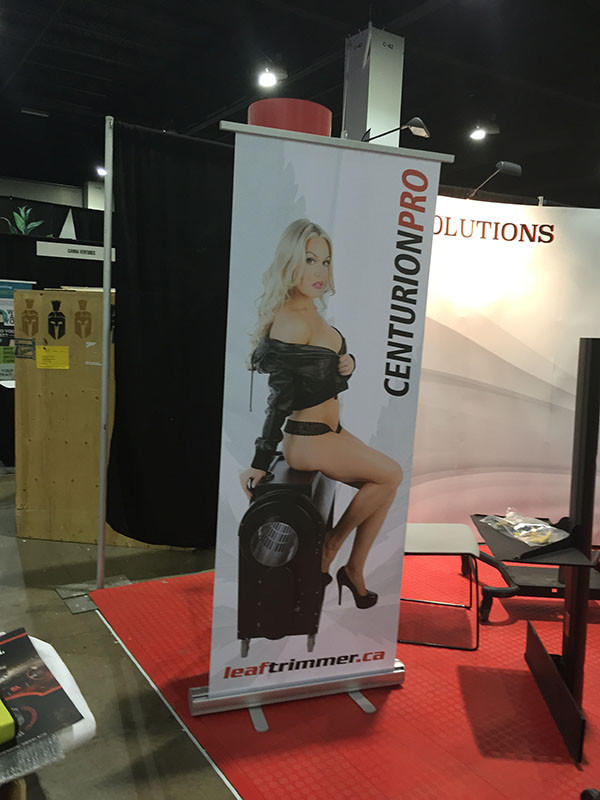 Picture the scene… It is CannaCon, a respectable B2B cannabis industry tradeshow in Denver, Colorado. I am walking and talking with Morgan, at the time President of the MJBA, later Founder and CEO of the Cannabis Women’s Alliance. We were discussing what topics we should discuss on an upcoming panel about the role of women in the cannabis industry we were both participating in that afternoon. All of a sudden, we both stop in our tracks at the sight of a nearly naked, black leather thong and biker jacket clad woman appearing to sit on some heavy machinery.

We realize that it’s a larger-than-life sized poster. And there is more than one of “her” in the booth, for a trimmer company. We look at each other, and shake our heads in disbelief. Really?

Apparently, the company felt that sticking a nearly naked female body on their machine would sell more of them to… I guess not women?

We had a topic for our afternoon discussion. And I made a mental note to check who is the competitor of that brand, and reach out to them to help them with their marketing. This isn’t the only instance of blatantly sexist packaging or marketing imagery that has been put out there by companies in the cannabis vertical.

Or any vertical for that matter.

Marketing for marijuana products has included a lot of shapely women (and sometimes barely legal girls) slightly clad and suggestively posed to sell everything from buds and bongs to grinders. This booty-shorts-and-cleavage tactic in cannabis marketing stems from the misguided presumption that marijuana culture is primarily a male-centric party scene. Nothing could be further from the truth, and the owners of those brands seem unimaginably tone deaf to what is happening in their industry and the cultural shift in the society at large.

Those selling B2B should consider that 20% of cannabis business owners are women, that 36% of executives in the space are women, that 63% heads of testing labs are women. Women are increasingly the entrepreneurs and the consumers in the cannabis market. But despite this fact, some brands continue to behave as if their market consisted of stereotypical hormonal cisgender bros who won’t buy a thing unless they affix a pinup girl somewhere on there.

The 3 Measures of ROI for AI

Explainable AI - What it is and Why it’s Important