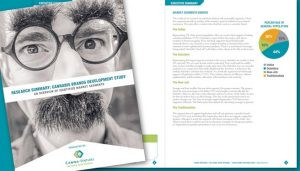 Canna Ventures has launched a groundbreaking new study on marijuana branding in the US. It is scheduled for release in early October 2014. This survey doesn’t simply retrace the familiar knowledge about adoption and usage. While valuable in its appropriate realm, such insights have been publicized by many other survey organizations. Instead the survey is designed to show the shape of “ideal marijuana brand,” as reported from consumers. It will serve as an important guideline to developing marijuana brands in the states that have already approved recreational use, as well as states that soon will.

Show those marijuana customers, and your brand, some respect! Average marijuana users have gotten a bad reputation, to say the least, and it can muddy the waters of how a recreational pot business should establish its brand. Early indications from a new study lend some needed focus to what consumers, both veterans and newbies, want from an ideal marijuana brand. In a word, they want it to be “respectful”. Sadly, association with marijuana has cultivated a less-than-favorable perception in many layperson’s eyes. Therein lies one of the largest challenges to new marijuana businesses: how to court new customers and also project a knowledgeable front to more experienced users? A new frontier has moved marijuana from the black market to marketing strategies and the first results of this new study explore how customers may come to trust a brand.

“Make the product appeal mature. Humor is fine, just don’t play up the ‘stoner’ thing too much…”

The hippie generation may have made real social change when America needed it most, but it also did plenty of damage to society’s view of pot users. Initiative 502’s marijuana customers will (mostly) look nothing like Cheech and Chong bumbling their way through wacky adventures fueled by comically oversized joints. Marijuana enters the mainstream and that should inform how brands are shaped. It never hurts to display knowledge of the industry’s checkered past or make light of the ongoing cultural timidness. Still, the new crop of customers should gradually shape the perception of marijuana use rather than treated on the same terms as yesterday’s stereotypes. Brands should strive to add to that conversation.

“I would want a brand to present itself as responsible and have it gear its brand message to people using marijuana responsibly.”

Along with keeping the “stoner thing” at bay comes the need for a marijuana brand to exude maturity. For all its legality, it’s still a drug and it’s still a crime to use in many circumstances. A brand should recognize that and approach possible customers with a savvy, grown up presentation that embraces safe use. At the same time, brands can explore and play with the heightened responsibility that this limitations presents. How can responsible use inform the culture and vice versa? These questions are worth exploring when establishing a brand.

“We are only offering the product if you want to purchase it, we don’t pass any judgment.”

Marijuana’s taboo days cast a long shadow over marketing tactics that will gradually unfold. According to the survey responses gathered, messaging should rely on the inclusivity of the product rather than treating it like an exclusive club. Back in the dark, dank days, a user had to leap over many hurdles before scoring a questionable high. You had to know a guy who knew a guy or fall in line with the right crowd or just play your cards right. Recreational marijuana eliminates that back room mentality and brands should reflect the open, welcoming, nonjudgmental reality that 502 brings to Washington. Above all, researchers identified the need for marijuana branding to speak to a legitimacy within the retail space. Potential customers will need time to accept the reality of a pot shop standing beside other businesses, and a branding can go a long way to move that acceptance along. Conductors of this as-yet unfinished study caution these findings remain preliminary and comprise a “broad theme based on early results.” Researchers are even more enthused about what the full study will show about consumer segments in relation to marijuana brands. Until then, this small slice of the survey sheds light on how actual people and potential customers would like to see marijuana presented.