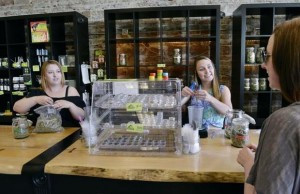 As this infant recreational industry takes its first few steps into the public eye, critics and curators alike have quickly pointed out any stumbling along the road less traveled, here and in Colorado. Rather than let the fledgling marijuana stores sink in the turbulence, businesses should view each misstep as an opportunity to improve individual locations, the industry as a whole, and the public’s view of legalization.

Marijuana stores began opening in Colorado a full six months before Washington, which provided our local market a sneak peak of what to expect. While the recreational market there has had a financial success, even beating out the medical marijuana in July it also provided some cautionary tales for Washington retailers. The most important take away for marijuana stores is to take the age limit and dosages seriously. In the nine months since shops opened in Colorado, two deaths and multiple cases of children visiting emergency rooms have been reportedly linked to the increased availability of marijuana. Fears of similar results in Washington caused the state Liquor Control Board to issue new emergency rules on edibles which suggests the regulatory entity could go even further if it sees greater public health concerns. Of course, the industry is not necessarily to blame for these misfortunes, but the one thing marijuana stores can do to prevent instances like these from happening in the future and avoid tightening government control, is to follow strict age and dosage limits. Additionally, many customers will not have smoked in years, or never at all, and so marijuana stores should provide guidance for the curious rather than fuel for the fire.

Opponents of marijuana fears involving increased crime in Colorado have been proven wrong so far, but marijuana stores might prove targets for criminals. While pot remains illegal at the federal level, most banks have refused to provide financial services to marijuana stores starting out. This means marijuana stores have had no choice but to begin operations dependent on cash. This reality, which could change at the federal level in the future, paints a large target on marijuana stores now. Many cases have already been reported in Colorado. The Seattle dispensary robbery in August was just the latest example of the need marijuana stores have for increased security in Washington. As localities adopt the state rules for retail and add particular amendments, many cities are choosing to include further security measures for stores. Entrepreneurs should proactively plan to lock the gate before the horse gets stolen.

In our recent discussion with CPA Jessica Allen, she brought to light the many hurdles that marijuana stores face as they open to the world. Her biggest advice is another testament to what Washington, and future states, can learn from Colorado’s six-month head start. Namely: start a co-op. With the high taxes causing doubt in some veteran customers, the tax hurdles marijuana stores will face come April 2015, and the continued banking barriers, cooperation from different marijuana stores and in different levels of production can lead to a better, more productive experience for all involved. Concrete financial data won’t come out for a bit, but Allen said the best thing marijuana stores can do in this uncertain environment is to join forces. The experiment continues and marijuana stores will have plenty to learn in the future as entrepreneurs gradually figure out what works and what doesn’t in this budding industry.